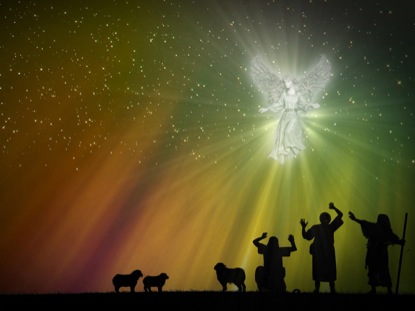 “When the angels went away from them into heaven, the shepherds said to one another, ‘Let us go over to Bethlehem and see this thing that has happened, which the Lord has made known to us.’ And they went with haste and found Mary and Joseph, and the baby lying in a manger.”  Luke 2:15

It’s common for people to ask:  What is faith?  What does it really look like to be living a faith-filled life?

For the answer, you don’t have to look any farther than the shepherds in the Christmas story.  Into their ordinary, humdrum day, a host of angels burst onto the scene with an amazing message:  the savior of the world had been born!  For a sign, the shepherds were told to look for (1) a baby (2) wrapped in swaddling and (3) lying in a manger.

When the angels had vanished into the night sky, the shepherds had a choice to make.  Would they stay next to their warm fire in the safety of their familiar fields?  Or would they set off?  Would they dare to step out with God into the unknown to search for this newborn king?

Scripture tells us they were determined to follow the sign and to see the child for themselves.  In fact, they “went with haste” into the city and found everything exactly as the angels had told them.  Their faith was rewarded a hundredfold.  Right in front of their eyes was Israel’s hope and glory. This tiny baby would bring salvation to the whole world!

But that’s not the end of the story.  These faith-filled shepherds had a job to do.  Having heard the angel’s words and having seen the baby with their own eyes, it was their joy to go and tell.  Simple, hardworking shepherds became evangelists as they shared the good news with the townspeople.  And when they finally returned to their flocks, they were changed men—changed by the power of God through a living faith!

The Manger and the Cross

To Save the Whole World

In the Fullness of Time